Vixie Cron is configured by editing a "crontab" file that indicates the date and times to run given commands. Each user of the system can have their own crontab file and there is also a system-wide crontab file.

The system-wide file is usually located under the "/etc" directory and called "crontab". Changes to this file are checked and reloaded automatically but changes to user-specific crontab files wont get picked up unless you reload them with the crontab command.

The beginning of the /etc/crontab file usually has some environment variable settings. Below that each line in the file gives the information for a particular job to run. A typical crontab line looks something like this:

The user field ("some-user" above) is specific to the system-wide crontab file. This field isnt necessary for user-specific crontab files as commands are run as the owning user.

The command field ("some-command" above) may be a straight-forward shell command or an executable script. The path to use to locate the script can be given in the PATH environment variable in the crontab file or you can give absolute paths.

The bit that this utility is designed to assist with is the Cron expression. It consists of 5 fields that represent the following: 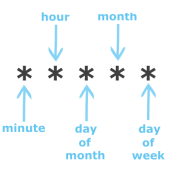 The values accepted for each field are: The minute field value must be 0-59, the hour field 0-23, the day of month field 1-31, the month field 1-12 and the day of week field 0-6 (Sunday is 0 but this can also be given as 7). Days can be also be given as three letter abbreviations (sun, mon, tue, wed, thu, fri, sat) as can months (jan, feb, mar, apr, may, jun, jul, aug, sep, oct, nov, dec) but you should be careful with these as some versions of Cron may not support them in ranges and lists (see below).

The values can be given in a variety of formats:


Each of the possible formats above effectively resolves to a list of values to match. For example, if you use the * character in the day of week field it is the same as writing 1,2,3,4,5,6,7. Another example: putting */20 in the minute field is like writing 0,20,40. This is important to remember as it is not possible to write something like */70 in the minute field and expect it to run every 70 minutes - it is invalid!

It also means you can get some unexpected behaviour - for example: say you put */40 in the minute field. This would not run every 40 minutes. It would actually run when the minute is 0 and when it is 40. So it would run 40 minutes after the hour and then again, 20 minutes later, on the next hour.

This utility produces true periodical expressions by only allowing factors of 60 or 24 for the minute/hour field respectively.